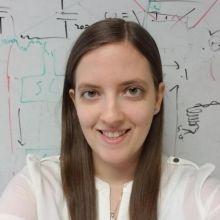 Anne Draelos, a postdoc in the Pearson Lab, has been appointed as an Swartz Foundation Fellow of Theory in Neuroscience for 2020-2022.  Anne received her Ph.D. in Physics here at Duke and is in her second year working with John Pearson. She was awarded the $200,000 fellowship based on her proposal "Adaptive Algorithms for Automated Circuit Dissection."

Anne's work focuses on designing algorithms for adaptive circuit mapping in large neuronal populations, to better understand the relationship between the structure of a neural circuit and its function. She recently developed a method using group testing to stimulate small ensembles of neurons to recover network connectivity in vivo, while an experiment is ongoing. During this fellowship, she plans to study the robustness of such network inference algorithms by simulating the photostimulation process in biologically plausible circuit models. Anne also has plans to expand these algorithms and models into realms with extremely high temporal resolution, to see if true synaptic connections could also be estimated in real-time through photostimulation experiments.