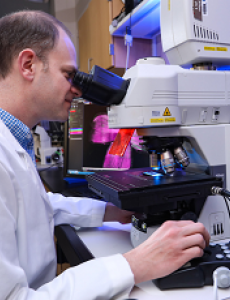 As often happens in medical research, a recent study intended to better understand the complexities of the central nervous system (CNS) resulted, as well, in surprising and extraordinary learnings that are already delivering hope to patients suffering with inherited retinal degenerative diseases caused by mutations in the CRB1 gene.

In a recent paper, published by Nature Communications, Jeremy Kay, PhD, associate professor of neurobiology and associate professor in ophthalmology, detailed a new method for identifying the mRNA isoforms produced by individual genes. Their study revealed that as many as 90% of CNS isoforms were previously unknown and overlooked by scientists as they try to understand gene function.

In this case, the team chose to study the development of the retina as an illustrative example of the intricacies of the “wiring” and complicated processing performed by the CNS. While it is a simpler system, the retina is built much like other parts of the brain:  its cells come together in circuits to process light, just as the brain is designed to process other kinds of complex signals. In their research, the team was working to survey which proteins were present on the developing retinal cells. They were particularly interested in cataloguing protein isoforms, which are subtle variations in protein structure that can change how proteins work.

While they didn’t set out to study CRB1, they knew it was present in the developing retina and that it fit their study criteria. In truth, it was the only disease gene on their list and the only one related specifically to retinal diseases. Yet, in the process of characterizing the different gene variations, it came as a surprise to the group when they found a new “recipe” for CRB1; after all, CRB1 was one of the most studied genes on their list. They found that the same gene makes different RNAs and confirmed that there are two different isoforms of the CRB1 protein.

Before the paper, the team believed there was a single major version of CRB1, located in key supporting cells known as glial cells, which form junctions with the photoreceptor cells. However, their study revealed the discovery of a second more abundant variety – now referred to as CRB1-B – located within the photoreceptor cells.

Finding this new version in the photoreceptor is a game changer in light of the critical progress, over the past few years, in the treatment of inherited retinal diseases. In 2018, the FDA approved the first gene therapy for retinal disease. In gene therapy, a working copy of a mutated gene is inserted into retinal cells to recover function. For this strategy to work, it is crucial that the gene therapy be delivered to the cells that normally use the gene. The Kay lab’s discovery suggests that previous gene therapy efforts were planning to put the wrong version of CRB1 into the wrong cell type. Based on the Kay lab’s work, they have proposed the idea of replacing a working copy of CRB1-B into the photoreceptors. This idea has received considerable attention from corporate collaborators that are interested in further developing this into a gene therapy.

While there is still significant research to be conducted, the potential benefits of these findings have garnered notice from companies who want to do the experimental groundwork to show that there’s enough promise to take this gene therapy to clinical trial.

“What’s truly rewarding is that I’ve spoken with parents and other advocates who now have hope and are excited that there’s a new discovery that provides a really clear and compelling new direction, that no one has tried before, for making a gene therapy that can help their child,” says Kay.

This study led by Kay shows why research continues to be a top priority at Duke Eye Center. Through the unexpected findings of this exploratory work, the team came to a more conclusive understanding of the CRB1 gene and how it impacts the important functions of the retina and can cause progressive degenerative eye disease. Such research gives rise to hope for future gene therapy and the continued exploration of other inherited retinal diseases.