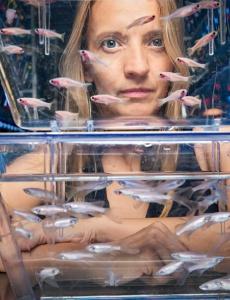 The questions pursued by Eva Naumann’s research team are nearly as large and intricate as the brain itself: How does the entire brain transform sensory inputs into actions, and what neural pathways do these impulses travel?

Even in the relatively small brain of the 3-millimeter translucent larval zebrafish she studies, it’s a question that involves ridiculous levels of complexity. For comparison, our human brain contains 86 billion neurons, whereas the zebrafish contains a manageable 100,000. Naumann’s goal is to map the ways these neurons functionally connect to each other to produce thoughts and behavior in this relatively tiny vertebrate brain.

“I’m not afraid of complexity,” Naumann says from behind a colorful mask, sitting in her sunny but spare Bryan Research office. “That’s probably what defines my approach to disentangling the many functions of neural circuits in these little brains. Sometimes it can be dangerous.”

Fortunately for her, technology marches forward, and the tools she needs to see the nervous system’s complexity and interpret its meaning have been growing according to Moore’s Law. Advances in microscopy, genetically engineered fluorescent activity sensors, and optogenetic actuators now permit the visualization and manipulation of all neurons in the zebrafish brain.

“None of these tools are unique to zebrafish. I just think the zebrafish might be the first vertebrate model system where you can actually map every single neuron, and possibly, in the future, every single synapse, and build a quanitative model of the entire brain,” said Naumann, an assistant professor of neurobiology in the School of Medicine. “You could possibly, especially with modern computational methods, map out the information flow across brain-scale neural circuits computing diverse information.”

It’s something Naumann has done already, in a study of “optomotor response,” the connection between what a fish sees and how it twitches its tail in response. A 2016 paper in Cell resulted in a map of the fish brain showing detailed activation patterns from interconnected neurons in the retina to those sending commands to the fish’s tail muscles.

Somewhat surprisingly, there’s no single element of the circuit that interprets the data alone. Rather, the entire network collaborates to combine, compare, and filter the information it receives from both eyes. The activity patterns created by the involved neurons essentially distribute the sensory information and transform it into executable motor responses.

Naumann wanted to know the minimum number of neurons required to build such a circuit. Working with Harvard colleague James Fitzgerald for about six months, she was determined to find the minimal model that could explain the behavior.

“To our surprise, the solution was, theoretically, you might not need any interpreter! Either you need a linear or nonlinear transfer function for that behavior that we described. And you really don't need anything else. It was kind of a bummer answer,” Naumann said, because it meant the circuit could be simpler than was suggested by the many activated neurons she observed but raised important questions about what all the motion activated neurons were doing. To explain their function, the scientists used a biologically constrained “neural network” computer model of the zebrafish brain to arrive at an answer.