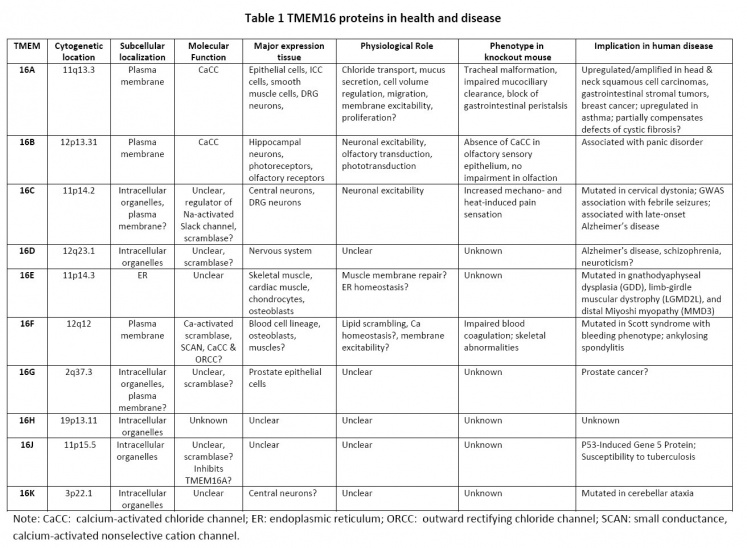 The TransMEMbrane protein 16 (TMEM16) proteins are evolutionarily ancient. They have been found to be expressed in different eukaryotic organisms from fungi to invertebrate to mammals. In mammals, the TMEM16 family comprises ten members (A, B, C, D, E, F, G, H, J and K). 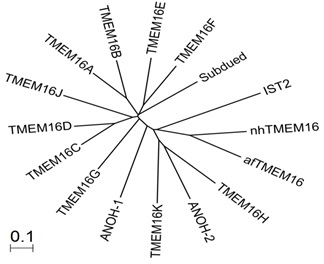 The discoveries concerning the TMEM16 family.

The TMEM16 family of genes was first systematically described in 2003. The cDNA clone, FLJ10261 (corresponding to TMEM16A or ANO1), was identified during in silicocharacterization of the human chromosome 11q13 region that is frequently amplified in various tumor types such as head and neck tumors, parathyroid tumors, and ovarian tumors, and in breast, pancreatic, gastric, and uterine cancers. Other human TMEM16 family members were subsequently identified based on sequence similarity through bioinformatic analysis. In addition to bioinformatics, early genetic analysis and expression profiling also implicated the importance of TMEM16 proteins in human health and disease (Table 1). For instance, TMEM16A (also known as DOG1, ORAOV2, or TAOS2) was overexpressed in gastrointestinal stromal tumors and oral squamous cell carcinomas; TMEM16G (also known as NGEP or D-TMPP) is highly expressed in normal and cancerous prostate; while mutations of TMEM16E (also known as GDD1) were associated with gnathodiaphyseal dysplasia.
An important leap in understanding the functions of TMEM16 protein family was
made in 2008, when the three independent groups simultaneously discovered that the TMEM16A is the long sought-after CaCC, whose molecular identity remained elusive for a quarter century. TMEM16A, as well as TMEM16B,  elicits CaCC current that resembles all the hallmark features of the 'classical' endongeous CaCC: anion selectivity (NO3->I->Br->Cl->F-), intracellular calcium-dependent activation, voltage-dependent activation at submicromolar calcium concentrations, and inhibition by the pharmacological agents such as niflumic acid (NFA) and 5-nitro-2-(3-phenylpropylamino)-benzoic acid (NPPB). 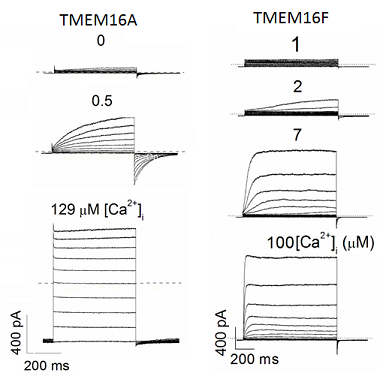 Significant progresses have been made toward understanding of the TMEM16 proteins. Based on the current knowledge of vertebrate TMEM16s and their homologs in lower organisms, the functions TMEM16 proteins are rather diverse: a TMEM16 protein could be an intracellular membrane protein that regulates organelle interactions (such as yeast IST2), or serves as an ion channel (TMEM16A and TMEM16B), a lipid scramblase (fungal nhTMEM16), or both (TMEM16F and fungal afTMEM16) on the plasma membrane. Except TMEM16A, TMEM16B and TMEM16F, the functions of other mammalian TMEM16 family members still remain to be established. 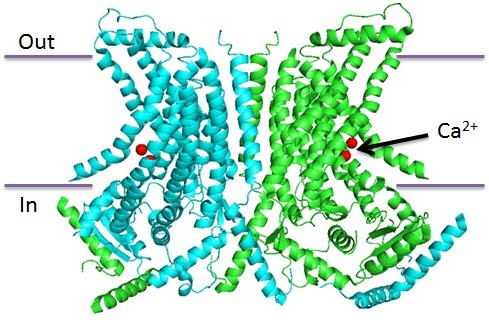 Structure and function of the calcium-activated TMEM16 proteins.

The fungal TMEM16 (nhTMEM16 from Nectria haematococca ) structure was recently solved. A functional TMEM16 protein contains two subunits, each of which has 10 transmembrane (TM) segments with both the N- and C-terminus inside the cell.
Five highly conserved acidic residues and a less conserved asparagine residue in TM6, TM7 and TM8 form the calcium binding sites. In the nhTMEM16 structure, two calcium ions were coordinated by the side chain oxygen atoms from these residues. Interestingly, the calcium binding sites reside in the middle of a potentially aqueous ‘spiral staircase’ shaped subunit cavity thatspans almost the entire membrane.

TMEM16 proteins in health and disease.

Recent studies have begun to shed some light on the physiological and pathological roles of the 10 mammalian TMEM16 family members. Table 1 summarizes the current understanding of the TMEM16 proteins on human health and disease.